A Few Good Ideas (I Think) for American History

HERE ARE A FEW IDEAS I found useful in my class to stimulate student interest in American history.

Students were naturally interested in the Salem Witch Trials. I happen to own a compilation of documents on various colonial witchcraft cases. Some incidents, to modern eyes, were clearly the work of pranksters. One egregious attack involved an evil “witch” who threw frozen cow poop through the window of a poor farmer at night. I mean, what evil demon would dare stoop so low!!!

I tried to humanize the people we studied at every chance. Samuel Sewall, a judge during the Salem trials, kept a diary for more than fifty years (1654-1728). My students could relate to Sewall’s son Joseph, age four:

November 6, 1692  Joseph threw a knob of Brass and hit his Sister Betty on the forehead so as to make it bleed and swell...I whipp’d him pretty smartly.  When I first went in...he tried to shadow and hide himself from me behind the head of the Cradle.

You could always get a discussion going, if you asked students if they had ever thrown anything at their siblings, or friends.

One student told me his brother got even after an argument by filling his deodorant dispenser with cream cheese.

That response made me laugh so hard it was a minute or so before I could continue.

WARNING: If you value class time, I can say, students will talk about sibling-related mayhem the rest of the period if you allow.

In discussing pioneers, I liked to emphasize the wide open spaces that existed in our nation’s early history. I often compared conditions in the 1780s to the State of Wyoming today. Wyoming is two-and-a-half times the size of Ohio.

But there are only six people per square mile.

Women who traveled West by wagon train often kept diaries. On July 5, 1847, Rachel Fisher described an Indian raid on her train. (Students might wonder about her poor spelling.)

After breakfast one morning, several men headed off across the prairie to do a little hunting. Not long after, the camp was surprised by a party of “about 40 Indians runing past the campt trying to take the horses  all the men that was in in campt took after them.”

The raiders soon surprised two of the hunters but rather than kill them “took guns and all their clothing except boots and hats….We have not seen any pawnee Indians since.”

Naturally, family strains showed on the trail just as they do for families today. Keturah Belknap, heading West in 1848, remembered hearing trouble one night in a wagon nearby. Until I read her account it had never dawned on me that in a circle of canvas-topped wagons, privacy might be at a premium.

While I’m writing I have an exciting experience. George [her husband] is out on guard and in the next wagon behind ours a man and woman are quarreling. She wants to turn back and he wont go so she says she will go and leave him with the children and he will have a good time with that crying baby, then he used some very bad words and said he would put it out of the way. Just then I heard a muffled cry and a heavy thud as tho something was thrown against the wagon box and she said “Oh you’ve killed it” and he swore some more and told her to keep her mouth shut or he would give her some of the same. Just then the word came in, change guards. George came in and Mr. Kitridge [the angry neighbor] went out so he and his wife were parted for the night. The baby was not killed. I write this to show how easy we can be deceived.

It might be interesting to ask students what the two hunters robbed of their clothes were thinking as they trudged back to camp in their hats and boots. Or: What did students think ever became of Mr. and Mrs. Kitridge and their child?

When we did a unit on Native Americans every year, I started with a discussion of names because I noticed  that my students would consistently laugh at the different sounding names in other cultures. “How many of you might make fun of a new kid who came to class and said his name was ‘Big Tree?’” You could use a variety of names for this example: Wolf Robe, She-Who-Bathes-Her-Knees, Sitting Bull, etc.

I tried to show students that other cultures had naming practices similar to our own. A student named Dan Maple stuck up his hand, for example, when I asked the question about Big Tree. We had fun with that. Students usually wanted to know what their own family names might mean. I discovered that many of my seventh and eighth graders, named Bradford or Tedford did not realize what the “ford” in their name signified. Students named Cleaver or Coulter or Croft had no idea where their family names originated.

I had a list of meanings of first and last names we used for this lesson, “Kevin,” for example, meaning, “handsome.” Using Kevin Bacon as an example, I liked to ask, “What does his name really mean?”

The best answer a student ever gave: “Handsome Greasy Pig Fat.” After we established that, Native American names no longer seemed odd. 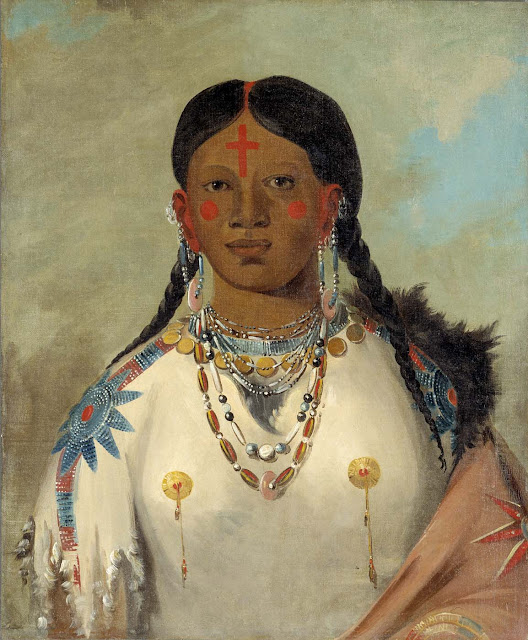 She-Who-Bathes-Her-Knees by George Catlin.
(I had a friend in college named Steve Kneebone.)

I had a good picture to start a lesson on John Muir and Teddy Roosevelt and early efforts to protect the environment. This photo shows a portion of a sequoia tree branch that broke off and shattered on the ground. A park ranger told me the branch was originally almost 150 feet long.

I liked to ask my Ohio students, “How many of you think that’s a big tree?” Then I’d tell them, “That’s a tree branch.”

Montana is home to just over a million.

Jim Crow Laws: If you asked a class to list all the ways African Americans were once separated from whites you almost always got the same handful of responses. I used to write the four listed below on the chalkboard before class (geez, I’m old), pull down a map, and tell students I could “predict” their answers.

A typical class could give you:

I had prepared a more detailed reading for my classes that listed almost seventy examples. Several caught the attention of students because they were so petty. It was illegal, for example, for blacks and whites to play checkers together in one city. Blood banks kept donations separated by race, and many more. There were separate homes for the blind. I used to “mime” the blind idea, and wander around class, saying, “Are you white or black? Because if you’re black, I don’t like you.”

Women fight for equality: As the years passed, I found that the young ladies in class realized less and less, how poorly women had been treated in the past. There are a thousand examples, but one that worked was to mention rules for airline stewardesses in the 1960s. A stewardess could be terminated for three reasons, where pilots or mechanics could not. I liked to have students try to guess.

Those three reasons: gaining ten pounds; “aging out” at 35, or getting married. The latter reason had to do, in part, with the reaction of the mostly male business travelers of the era, who preferred to flirt with unmarried stewardesses.

(Of course, they were hired based on their looks.)

I could also get the girls in any class stirred up by asking, “Do you know why ships are referred to as ‘she,’ for example, ‘The Titanic struck the iceberg and two hours later she went to the bottom?”

Almost no one ever knew that inanimate objects, controlled by men, were tagged with the feminine pronoun. That realization would make for spirited conversation. I always liked to use humor as much as possible and liked to throw this idea out. I said there were feminists at one point who began to argue that a new word was needed—so that women weren’t being labeled like a second-class version of “men.” The argument was that the word should be changed to “womyn.”

I liked to throw up my arms to form a “Y” and shout, “Womyn with a Y! Come on ladies!” The girls would laugh and throw up their arms and you usually had a couple of boys throw up their arms in support. I’d say to the girls, “Okay, Javon, there,” who had his arms up, “Javon is the guy you want to marry!”

I’d see Claire or Sidney or Natalia in the hall later that day and throw up my arms and make the “Y” sign.

I don’t know. It worked for me. 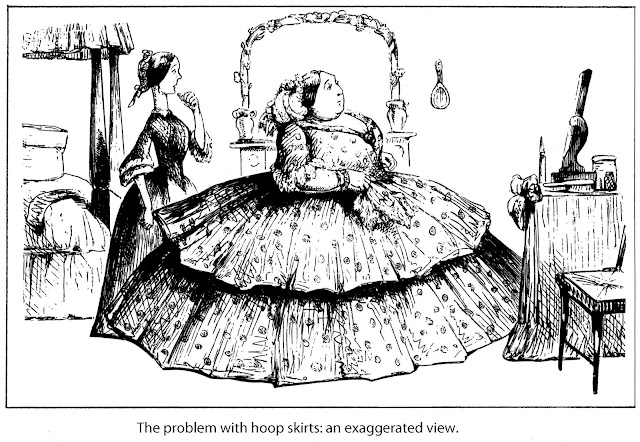 I NEVER CARED MUCH for history textbooks and usually wrote my own material. If you’re interested the following blog posts, among others, might be of some use.

If you’re interested in an excellent first-hand account on the Civil War, try: “A Rebel Soldier’s War,” the story of Sam Watkins, who served for four years with the First Tennessee Infantry.

On the fight for women’s rights: “You’ve Come a Long Way Baby, the Fiftieth Anniversary of the Feminine Mystique.”