In all likelihood, Betsy DeVos will soon be confirmed as U. S. Secretary of Education, meaning she’ll be guiding our nation’s public schools. Typical of most candidates for the job, DeVos never taught a day in her long, privileged life. DeVos never attended public schools and never sent her children to public schools, either.

We have had clueless Secretaries of Education before, but what separates Ms. DeVos from people like Arne Duncan and Bill Bennett, both singularly clueless, and makes her a million times more dangerous, is her love affair with for-profit charter schools. Consider K12 Inc., a typical for-profit online charter school in which DeVos has invested. K12 operates like any business, a giant pharmaceutical company, a strip mining conglomerate, or a cigarette manufacturer.

Because K12 is a publicly traded company—with a stock price that rises and falls—they are required to publish salaries. Since 2012 top earners include:

Of course, all good businesses cut costs where they must. British Petroleum, health insurance companies, car dealers, this is what they do. It’s that “business efficiency” we hear critics of regular public schools talk so much about. That means teachers at K12 Inc. sacrifice for the good of the cause. In a study done in 2014 it was shown the average Ohio public school teacher earned $56,855 per year.

In addition, for-profits have “business expenses” ordinary public schools do not. To turn a profit a for-profit must advertise. According to an investigative report by USA Today, K12 spent $21.5 million in taxpayer dollars on advertising in the first eight months of 2012 alone. It also helps to donate millions of taxpayer dollars to campaigns of elected officials, who then keep taxpayer dollars flowing in a virtuous circle.

The only fly in the soup is this: Paying megabucks to executives and donating megabucks to politicians doesn’t help children. In the most detailed study done so far on Ohio E-schools, it was estimated that $1 billion in state funding went to on-line schools between 1999 and 2014, including Ohio Virtual Academy, an offshoot of K12.

What did taxpayers get for that pile of cash? On state report cards, grades for charter schools, generally, were poor.

For E-schools results were grim: Ohio Connections Academy came in at 55.1.

The Buckeye Online School of Success had success with 45% of all students.

Electronic Classroom of Tomorrow (and classroom for next year for many students since few graduate on time): 38.4.

And we saved the “best news" for last! According to a Stanford University study of Buckeye State E-schools, students lost the equivalent of 72 days of reading learning yearly, compared to students in regular public schools. In math, it was worse: 180 days of math learning lost annually.

You read that right.

If you do the math (and for Ohio E-school students this might be difficult) there are:

“There’s still some possibility that there’s positive learning,” Margaret E. Raymond, project director at the Center for Research on Education Outcomes, which completed the study, told a stunned reporter last fall, “but it’s so statistically significantly different from the average, it is literally as if the kid did not go to school for an entire year.”

So there you go. Turning students into gold hasn’t worked so far and probably never will.

Ms. DeVos may have a plan to protect children from grizzlies. Sadly, she shows little interest in protecting them from greedy corporate raiders.

To get a good sense of how K12 Inc. works read “Fifteen Months in Virtual Charter Hell.”

If you happen to have a masochistic streak, and want to see a list of all the politicians to whom Ms. Devos has donated, check out this link.

Forced to Betray My Mission: What a Real Teacher Fears

If you think high-stakes testing is doing severe damage to U. S. education you are not alone.

I know, when I retired in 2008, after thirty-three years in the classroom, it seemed I might be crazy. High-stakes testing was not improving education. In fact, it appeared to be doing harm.

To wrap up 2016 Badass Teachers Association (if you haven’t joined you should) posted the following picture on its Facebook page. It came by way of Ken Previti, an education blogger, himself: 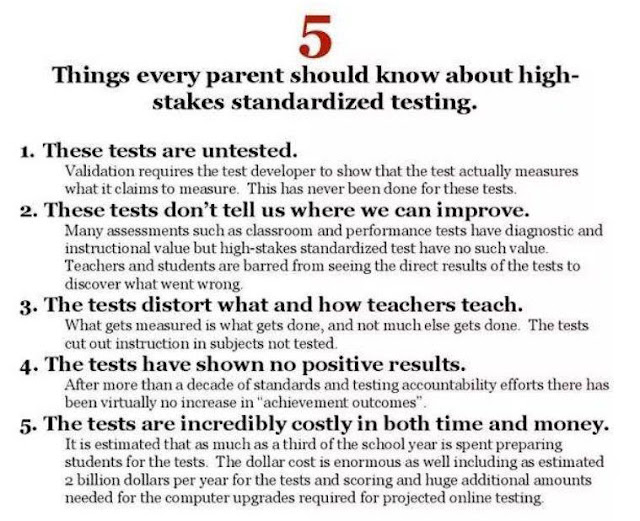 There were a number of quick comments in support. Cedie Ache, another education blogger, added #6: “The tests make both curricula investors and test-makers RICH, RICH, RICH.”

Then Bobby Lee Reuss weighed in, speaking from the heart—speaking, probably, for millions of educators who work with or have with children every day. He captures, I fear, many of the deepest concerns of front line teachers, principals, psychologists, and counselors, as they try to avoid the yawning pitfalls of “school reform.” Like so many who work with children, Reuss wonders if reforms have been driven by fools at the top. Now he fears the new administration in Washington, D. C. could be even worse. Here’s his (lightly edited) response:

The majority of experienced teachers who actually earned our post-graduate degrees and teaching credentials after having been educated and trained by the Education Departments of real and respected colleges and universities have a justifiably immense trepidation about the nomination of Betsey DeVos and the incoming Trump administration’s orientation and tendencies regarding many aspects of public policy impacting public education. That trepidation is amplified by both his and DeVos’ demonstrated vulnerability to hamartia and hubris in pursuing their goals.

(I’m going to admit right here, I had to look “hamartia” up. It means “a fatal flaw leading to the downfall of a tragic hero or heroine.”)

We fear that both DeVos’ and Trump’s approval of the corporatization of education and the proliferation of charter and/or privatized schools will be incalculably detrimental to traditional public school districts and to the education of America’s present and future generations of students. It could be catastrophically much worse than the generally neo-liberal (i.e. moderately conservative/Rockefeller Republican) stances of the previous Administrations.

(Reuss isn’t just knocking Trump and DeVos. Like many of us he lived through the bleak years of Arne Duncan’s time at the U. S. Department of Education, watched No Child Left Behind implemented, and saw it fail, saw Common Core touted by one set of politicians and demonized by another, not one of whom seemed to have a clue.)

This is very personal for me; I regretfully retired after 33 years as a high school Honors/A.P. teacher (British/World and American Lit & Comp) largely because our budget difficulties in California, combined with the demands and requirements of the Bush-era NCLB and the Obama Administration’s subsequent modifications of it, had resulted in the installation of Broad-trained administrators at our D. O. and at our school sites. Our district pimped itself (proudly) for Broad grants and spent money on whiz-bang tech panaceas du jour while “streamlining” instruction via the new standards and application models.

As a consequential part of the resultant blow-back, our librarian and her aide were removed from their positions while our school library itself had all of its books jettisoned as it was converted into a computer lab (the fourth at our school site). The principal at that time made the observation that the elimination of the library was no great loss because “....nobody reads books anymore.” (I had paid for a subscription to The New Yorker and Smithsonian magazine for the library for a number of years so that my students—and the student body at large—would have access to such fine periodicals and their wide-ranging subject matter). Then our Superintendent, the one responsible for establishing and implementing “the new paradigm,” went to work for the Broad Academy and turned the district over to one of his (Broad-influenced) lackeys (who’d been overseeing, among other things, I.T. at the D.O.)

As a veteran teacher in my field, I felt more and more alienated from my job over the past twelve years by federal, state, and local diktats that hemmed and hedged I and my colleagues in to such a degree that we could not give our kids the sort of education (and the experience of exploration, joy, and creativity) in our subjects that had worked so well for previous classes over the decades. Increasingly, I felt like I was being forced into betraying my mission, my field, my subject, the Humanities in general and my students until I could no longer stomach being a cog in the new system (and forcing my kids to accept their roles as cogs in a corporatist-infected and/or privatized perversion of what public education should be.

If President-Elect Trump’s and Betsey DeVos’ agenda and proposals are in sympathy, concord, and support of the corporatists and their allied privateering privatizers seeking to acquire, absorb, and vampirize public school systems, I (and numberless infinities of my fellows) dread the depredations that may further accrue and become established as public policy in whatever is left of public education during both his and her tenure.

Trump’s and DeVos’ agenda and proposals seem bound to produce catastrophic results of greater breadth and magnitude than we have seen yet, perhaps paralleling the shocking consequences that already have been exposed as results of the privatization and out-sourcing of prisons over the past several years.


Like I said, when I retired in 2008 I thought I must be missing something. I could not fathom what we were gaining by all the reforms, by all the billions spent on testing, by all the laws implemented to punish teachers.

It turns out, I’m not alone. Mr. Reuss is not alone.

I missed this story when it first came out, but millions of teachers are deeply concerned. Perhaps you missed it too, since so many of you would have been busy wrapping up the million year-end tasks that mark the lives of all good teachers. In May 2016, USA Today published a story with this headline:

Survey: Nearly Half of Teachers Would Quit now for Higher-Paying Job

Based on work done by the Center for Education Policy, and interviews with more than 3300 teachers, one of the most frightening details came up in the second paragraph, when reporters noted six in ten teachers were losing enthusiasm for their jobs. That response is chilling, I believe; but we can’t blame teachers. Just under half, 49%, said the stress and disappointments of the job “aren’t really worth it.”

Even worse, it’s not just teachers who suffer—as we hammer children with standardized tests. Jahana Hayes, 2016 National Teacher of the Year, expressed concern: “Every day I see students who are increasingly frustrated because they are excellent students who are productive and active in the school community, yet this may not translate in their standardized test scores,” she wrote in her application for the award.

I decided to check the survey results myself. If you think “school reform” has been a disaster, join the crowd.

(It probably should be a mob!)

First, most real educators realize their voices are ignored at the national level, by arrogant experts: Secondly, teachers admit they are devoting significant chunks of instructional time to testing—but don’t believe all that time is justified. 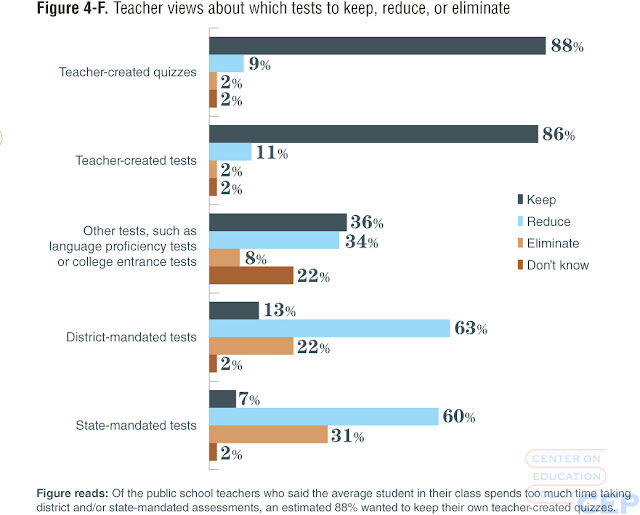 And third, I might add a little of my own research.

If you think standardized testing hasn’t helped, test scores from the Program for International Student Assessment, from the Scholastic Aptitude Test, and several other measurements show they have not.