I've been retired from teaching now for three years and don't miss the grind.  I loved life in the classroom, but if you're doing the job right, the demands are unending.  So for a few blog posts, I'm going to try to explain why teaching matters.


It's not just academics, either.  You talk to the 14-year old girl, who has been lying about her age and seeing a 36-year-old man.  You listen to the boy, who is being bullied, and has been spat upon, and you go look up the bully, yourself.  You talk to the mom who doesn't know how to control her teenage daughter; and you tell her not to nag and berate.  You tell her to remember the words of Anatole France:  “The more you say, the less people remember.”


Good advice when dealing with teens. 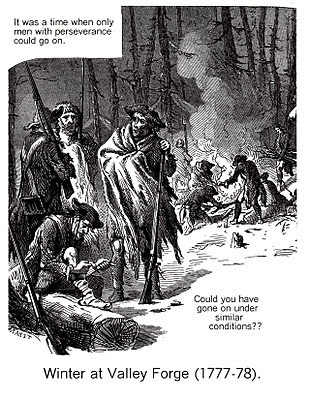 For most of my career I taught American history.  Early on, I stumbled across a type of activity that seventh and eighth graders loved, and one at which they excelled.  We were doing a long reading on the famous winter at Valley Forge (which I wrote myself).  At one point the reading included this section:

Food was in short supply and soldiers were soon reduced to eating nothing but “fire cake,” a mix of flour and water cooked over a fire.

We spent part of class discussing some of the tough vocabulary and then students were told to finish the reading that night.

On the drive home that afternoon, I began thinking over more creative ways to use the material. Instead of giving a quiz, I decided to do a short skit to start class the next day.

Now, when students filed in and took their seats, I explained that we would be having a “fire” in the center of the room and “soldiers” would sit around it warming themselves over the flames. We needed volunteers to discuss camp life. Hands shot up all over the room.

The first group to act out the scene started slowly and it looked like the idea might fizzle. Then one of the boys took off a shoe and threw it in the “fire,” saying, “At least we’ll have something to eat besides fire cake.” His “comrades” nodded and rubbed their hands and looked dejected. A chronic complainer in class starred--as a chronic complainer in Washington’s army.

In another bell, two volunteers set their shoes aside before the skit and plunked down beside the fire in stocking feet. After a few minutes, one keeled over “dead.” The other soldiers sniffed loudly, from cold or sorrow we knew not which. Then one of them tugged off the dead man’s socks and placed them on his frostbitten hands like mittens.

A second exclaimed, “Dibs on his underwear!”

This brought moans and laughter from the audience and I knew we had stumbled onto something big.

Once it became clear that classes enjoyed doing skits we began experimenting. But it was the suggestion of a young lady in one of my morning classes that sent us digging deeper into this rich lode. I was still a young teacher at the time and Lisa was one of Loveland’s rare minority students. Her grades were fair at best, and the girl could be a pain if she disagreed with your teaching methods.

One day she approached my desk. We had just started a unit on the South in the years before the Civil War. She bent close and whispered:  “I think we should do a skit about slavery.”

Normally, I might have steered away from the topic, lest we seem insensitive. Lisa’s enthusiasm, however, altered my thinking. The two of us whispered back and forth before settling on a “panel discussion” involving slaves and slave owners. Lisa volunteered at once to play a slave. When we explained her idea there were plenty of volunteers. John, who liked to argue with Lisa anyway, agreed to play her master. We picked a second “master” and explained that none of her slaves would be present for the skit. Then we selected two more “slaves.” They would be from different plantations and their owners would also be absent.

This gave variety of perspective.

In years to come thousands of students took part in all kinds of skits and it was often subtle touches that made their performances great. In Lisa’s case she wore a blue bandanna round her head and adopted a field hand’s manner of speech. She also ran the kind of chain you use to secure a dog in your yard round her wrists and through her belt loops and jingled it whenever John claimed to be a “good master.” John picked up on every cue and threatened “trouble” when they returned to their plantation. Lisa refused to be cowed, saying if he beat her “like always” she was not afraid.

At some point, John insisted slaves sang in the fields because they were happy. Lisa objected and said music lightened the load of sorrow bearing down upon their souls. She sang a few verses from a Negro spiritual and explained their hidden meaning to make the point.

This panel discussion--the brain-child of one creative young lady--was the first skit we ever did intended to last the entire period.

Of course, young teachers enter the classroom believing they can save every child.  And today politicians who couldn’t save a kitten stuck in a bush insist this miracle can be achieved on a national scale.

If you plan to survive in teaching, however, you must divest yourself of this delusion or prepare for prolonged bouts of depression. You must try to save every child. That you must do. You must assume there is potential in every head and do everything in your power to tap it. But you must be ready for failure.

You are a teacher.

When I first met Conan, near the end of my career, he had already been held back twice. In other words, he had a reputation for failure. A tall, thin kid, he favored Gothic clothing, and on first glance appeared to be the kind of character who might cause discipline problems. As it turned out, he rarely did homework and his test scores were low. But he was quick-witted and funny and had a maturity (partly based on age) that gave him the edge in discussion. I sensed he’d be a natural in skits and encouraged him to join a group preparing a presentation on Pilgrims and Indians.

The day of the skit when everyone else was ready, Conan insisted he needed more time. My heart sank. I thought he meant he hadn’t studied. No, he said, he needed time to dress. I sent him to the restroom. Five minutes passed. We sent a scout to find him. The scout returned.

I was starting to wonder if he might have skipped out the back when an old lady in a full-length black dress and white lace collar, gray hair pulled back in a bun, entered the room. Granny sported blue-tinted hippie glasses.

For the next forty minutes Granny was as good as anyone I ever saw in a skit. He (she?) knew why the Pilgrims went to Holland in 1609, before they came to America, and why they left, what weather was like when they arrived on these shores, and cackled as he explained. Sometimes he stumbled over answers, but only in character, as if memory was fading with age. He said he was shocked when the natives mooned the settlement. (That's a little know story involving the Pilgrims, not something we usually talk about on Thanksgiving Day.)

Once he hiked his dress to show a little Pilgrim ankle and called out in my direction:  “Hey, baby, give me a call!” His classmates were enthralled.

When the bell was about to ring we ended a minute early so I could tell everyone what a wonderful job they had done. I singled Conan out for praise. “How many think Conan deserves an ‘A+’?” Every hand went up and we awarded him a perfect score by acclamation.

It wasn't standardized learning, of course--and it didn't mean Conan's personal problems and troubles at home had suddenly evaporated.

Still, for one day, the young man had reason to feel proud.
Posted by John J. Viall at 10:22 AM